I’m so excited to be sharing this Q&A with the wonderful Douglas Stuart, author of Shuggie Bain.

First of all, huge congratulations on your debut Shuggie Bain! It’s already out in the US and Australia and it will be out in the UK in August!

Q: What inspired you to write Shuggie Bain?

A: No one particular thing. I grew up in Glasgow in the 1980’s but have lived in New York for the past twenty years. I think I was grieving for the boy I once was, for the people I grew up around and the city I love. I was just overwhelmed with a need to set it all on the page. I actually started with (what is now) chapter thirteen, where the characters Leek and Shuggie go to the closed down colliery and Leek teaches his young brother how to walk like a proper man. Then the rest of the book seemed to flow from there and there was no stopping it.

Q: How long did it take you to write your debut novel Shuggie Bain?

A: Like most writers I worked full time – except I worked in the fashion industry. It took me ten years to write Shuggie Bain;fashion is a really intense industry, and NYC is a really restless city, so I always had to be quite selfish in order to steal some time to actually write. I wrote Shuggie in the margins of the day. Once the book had its hooks in me the rest of my working week felt like an obstacle to overcome before I could return to my characters. There were periods where their stories swallowed me so completely. Writing this book definitely tested my marriage – my obsession with my writing has ruined many family holidays!

Q: Do you have a routine of writing at a certain time for a couple of hours or do you do it spontaneously?

A: I write full time now so I try to have the discipline of arriving at my desk after breakfast every morning. But I’m not too hard on myself if it doesn’t come to anything. Thinking and living and stepping back to consider your work are as necessary as writing itself. I’m both an early morning thinker and a late in the day writer – I’m useless after lunch so I try to keep the afternoon for admin and allowing my mind to wander. Because I live in a chaotic city, I find my most valuable tool is noise cancelling headphones. When I have those on, I can focus for hours. Any time I get stuck, I go out for a walk and New York usually presents me with some unexpected human behavior that inspires me.

Q: Was there a particular scene which you found hard to write (spoiler-free if possible)?

A: There is a scene near the beginning of the book where young Shuggie is playing near an old dis-used washing machine. He is bullied by an older boy. I found that scene particularly jarring because it deals with both abuse and homophobia – and it is really the turning point forShuggie. After this he is marked in his coal-mining community as too effeminate, as being ‘no right’. This was a hard scene to write becauseits always harrowing to steal the innocence of a child. Instinctively, all you want to do is protect your characters.

Q: Do you see yourself in your character Shuggie?

A: I think many writers pull from real life. Shuggie is too kind and too patient to be anything like me, he endures incredibly painful things with such grace,and I think they would make me crumble.

It’s not that I see myself in Shuggie, but that I see my life and my experiences growing up in Glasgow in all the characters. I tried to be as authentic and truthful as I could in re-creating the millieu – I hope that is one of the strongest things you will feel from the book. Sometimes in order to do that I needed to remove myself as the author to ensure I didn’t have too much intrusion. I wanted the reader to feel as though they were in the room, I never wanted them to have a sense that a writer was telling them this story and standing between them and these characters.

Q: What authors have influenced you and made you fall in love with reading and eventually writing a novel?

A: Growing up poor I rarely saw books that portrayed families like my own and that always made me feel so lonely. The first time I read Barry Hines’s A Kestrel for a KnaveI suddenly understood the power of literature because I felt seen. Later, when I discovered Agnes Owens and James Kelman, I saw that a writer can capture working-class lives with all the dignity and urgency and importance that we usually give to middle class characters. Poverty is just as worthy of the page as privilege is. I think the biggest influences on me as a writer have been Alan Warner, Irvine Welsh, Cormac McCarthy and Agnes Owens. I don’t know if this reflects in my work, but I admire their ability to look difficult things straight in the eye and write about it without embellishment. As a writer, everything you read has an influence on you – even if that feeling is about rejecting what you read.

Q: What are some of your favourite books?

A: There are so many to mention. Whenever I read queer or working-class characters on the page, I feel incredibly seen. I am always drawn to urgent working-class protagonists: Alexander Trocchi’s Young Adam, Phillipp Meyer’s American Rust, Agnes Owens’s Gentlemen of The West, Barry Hines’s A Kestrel for A Knave. (Ken Loach’s adaptation ‘Kes’ is an incredible film.) I try to read as much queer fiction as I can: James Baldwin’s Giovanni’s Room, The Lost Language of Cranes by David Leavitt, The Swimming Pool Library by Alan Hollinghurst, Alexander Chee’s Edinburgh, Colm Tóibin’s The Story of the Night.I LOVE Thomas Hardy: but am especially fond of Tess of the D’Ubervilles or Jude the Obscure. Arabella Don is one of my favourite characters ever. Of all the Scottish books that have had influenced me, I really admire Alan Warner’s Morvern Callar and Janice Galloway’s The Trick is to Keep Breathing. Any fan of Elinor Oliphant should read Galloway’s book.

Q: Are you currently reading anything – if so, what are you reading at the moment?

A: There have been so many great books published recently but I love: Real Life by Brandon Taylor, The Memory Police by Yōko Ogawa, and Mary South’s short story collection You Will Never Be Forgotten is so exciting and strange. At the moment I’m finding myself in need of some comfort from what I read so I’m re-reading The Persian Boy by Mary Renault and Maria McCann’s As Meat Loves Salt. I find McCann’s book comforting and disturbing at the exact same time – and I love that. It’s a gay love story that is both immersive and propulsive. I’m obsessed with Jacob Cullen! If I had the money, I would commission a trilogy!

Q: Is there a lingering idea for a future novel?

A: There is! I am at work on a gay love story set amongst the territorial gangs of Glasgow. It’s about two young men who are in love and are divided by sectarian lines. It has been described as Romeo and Juliet with homemade tomahawks and shanking blades!

Thank you so much to Douglas for taking the time to answer these questions for Breathing Through Pages!

I hope you guys enjoyed reading this Q&A! 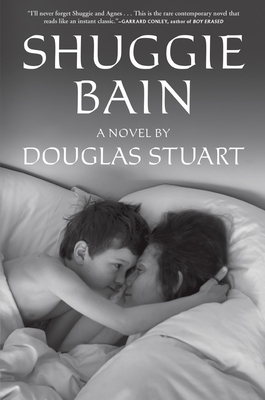 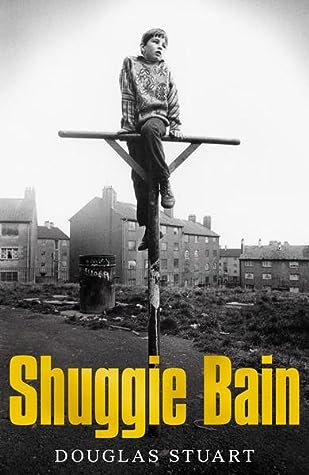 Shuggie Bain is the unforgettable story of young Hugh “Shuggie” Bain, a sweet and lonely boy who spends his 1980s childhood in run-down public housing in Glasgow, Scotland. Thatcher’s policies have put husbands and sons out of work, and the city’s notorious drugs epidemic is waiting in the wings. Shuggie’s mother Agnes walks a wayward path: she is Shuggie’s guiding light but a burden for him and his siblings. She dreams of a house with its own front door while she flicks through the pages of the Freemans catalogue, ordering a little happiness on credit, anything to brighten up her grey life. Married to a philandering taxi-driver husband, Agnes keeps her pride by looking good–her beehive, make-up, and pearly-white false teeth offer a glamourous image of a Glaswegian Elizabeth Taylor. But under the surface, Agnes finds increasing solace in drink, and she drains away the lion’s share of each week’s benefits–all the family has to live on–on cans of extra-strong lager hidden in handbags and poured into tea mugs. Agnes’s older children find their own ways to get a safe distance from their mother, abandoning Shuggie to care for her as she swings between alcoholic binges and sobriety. Shuggie is meanwhile struggling to somehow become the normal boy he desperately longs to be, but everyone has realized that he is “no right,” a boy with a secret that all but him can see. Agnes is supportive of her son, but her addiction has the power to eclipse everyone close to her–even her beloved Shuggie.

A heartbreaking story of addiction, sexuality, and love, Shuggie Bain is an epic portrayal of a working-class family that is rarely seen in fiction. Recalling the work of Edouard Louis, Alan Hollinghurst, Frank McCourt, and Hanya Yanagihara, it is a blistering debut by a brilliant novelist who has a powerful and important story to tell.

SHUGGIE BAIN is already out in the US and Australia and will be out in August in the UK. All the buy/pre-order links are below!

Add ‘Shuggie Bain‘ to your TBR:

Douglas Stuart is a Scottish – American author. His short story, Found Wanting, was published in The New Yorker magazine.

His debut novel, Shuggie Bain, is published by Grove Atlantic in the US and Picador in the UK. It is to be translated into Swedish, Norwegian, Italian, German and French. He wrote Shuggie Bain over a ten year period and is currently at work on his second novel.

Born in Glasgow, Scotland, Douglas was raised in some of the city’s most deprived housing schemes, including the now demolished Sighthill tower blocks. After receiving his MA from the Royal College of Art in London he has lived and worked in New York City.