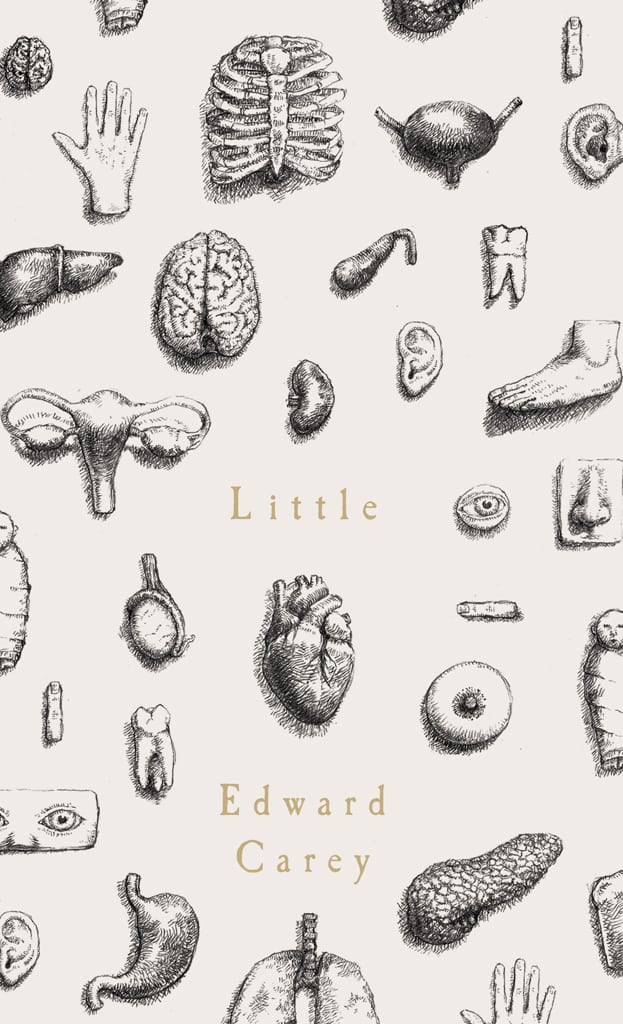 Until I find a hi res cover of the book this will be up.

Seeing Little all over Twitter made me very curious about it plus the art inside. I was lucky enough to get a copy of it to review and I absolutely adored it.

Little follows Anne Marie Grosholtz later to be known as Madame Tussaud. We follow Marie from the minute she’s born and then into her old age. Marie’s life is full of adventure, pain, loss, happiness, excitement. At a young age [and after the death of her parents] she becomes apprenticed to a wax sculptor called Doctor Curtius who sees potential in her because she’s not the one to shy away from looking at the ugly side of life. By chance they move their residence to an odd house where she meets a widow and her strange son who become entangled into the wax world and leave a mark upon Marie. Doctor Curtius’ wax figures attract attention and one day Marie meets a princess who hires her to be her ‘art teacher’ and teach her everything she knows. She forms a bond with the princess but things slowly change because something’s beginning in Paris – something that will change Marie’s life forever.

Congratulations, you have survived my terrible summary of Little! Moving on – what can one say about this book except that it’s magical, fantastic and brilliantly written? There’s a quote on the back of Little that stayed with me throughout the book and that’s one author saying that the book is written ‘with surgical precision’ which I have to completely agree with. I loved Carey’s writing style and how he managed to bring Marie, Doctor Curtius, Edmond and other characters to life. The book contains drawings made by the author which compliment the story so well. I am in awe of Carey’s talent in both fields – writing and drawing. The story kept me entertained, made me feel sad towards the end and happy because I loved following Marie and her adventures. I can honestly say that Little is a book I won’t forget and that it will stay with me for a while.

If you enjoy reading historical fiction and stories that stay with you long after you finish them – Little is definitely the book for you.

I would like to thank the publisher Belgravia Books (Aardvark Bureau) for providing me with a copy of this book in exchange for an honest review. All opinions written here are my own and weren’t influenced by anything.

Add ‘Little by Edward Carey‘ to your TBR:

Edward Carey is a writer and illustrator who was born in North Walsham, Norfolk, England, during an April snowstorm. Like his father and his grandfather, both officers in the Royal Navy, he attended Pangbourne Nautical College, where the closest he came to following his family calling was playing Captain Andy in the school’s production of Showboat. Afterwards he joined the National Youth Theatre and studied drama at Hull University.

He has written plays for the National Theatre of Romania and the Vilnius Small State Theatre, Lithuania. In England his plays and adaptations have been performed at the Young Vic Studio, the Battersea Arts Centre, and the Royal Opera House Studio. He has collaborated on a shadow puppet production of Macbeth in Malaysia, and with the Faulty Optic Theatre of Puppets.

He is also the author of the novels Observatory Mansions and Alva and Irva: the Twins Who Saved a City, which have been translated into thirteen different languages, and both of which he illustrated…