The House of Impossible Beauties is one of those books you stumble upon once in a while that leave a mark on you. What first attracted me to this book was the topic it deals with plus it being a LGBTQ book it was an immediate add to my to-be-read shelf. What awaits you inside is a story filled with courage, hope and suffering but above all that what this book carries and showcases the most are love and support between each character in it.

Before reading this book I had to watch Paris is Burning because for some reason I wanted to see what exactly inspired this interesting-looking book. The documentary was truly amazing and this book follows the fictionalized lives of some of the real people from the documentary like Dorian Corey, Angel Xtravaganza, Venus Xtravaganza with appearances by some other characters like Pepper Labeija and many more. It mainly focuses on the life of the House of Xtravaganza : Hector, the father of the house, Angel Xtravaganza who is the mother and Venus, Juanito and Daniel. Each new part begins with a chapter narrated by Dorian Corey with her sass and wisdom.

At the beginning of the book we are introduced to each character and chapter by chapter get to know their upbringing stories as well as their lives in the present.  I loved reading their stories because they show the truth behind being a trans person and the judgment they have to face daily because of being trans. What this book offers is a real look at the 1980s, the HIV crisis and the moral people had back then about things that are somewhat accepted in our society [I say somewhat because there are still parts of the world where people look at someone who’s gay or trans with disgust]. These are the sort of stories that need to be told more often because they are so good and they made me feel closer to the T part of the community. I must say that where I come from trans people as well as gay people are treated very harshly because of the religious beliefs people have but nowadays a lot of young people have no judgement towards the LGBTQ community which makes me happy because future generations will be raised without hate towards people who are different.

What makes this book so special to me are the characters in it. I loved reading about them, hearing their stories, passions and their dreams. Throwing shade is the way they communicate at times and I just loved every bit of shade they threw at each other.

The only thing I found as a con is the use of pronouns because at times they were confusing. Some people may find the use of Spanish in the sentences annoying or too much but to me it made the story much more real.

What can I say? This review is a rollercoaster ride and I hope I presented the book and my thoughts in an interesting way that makes you want to pick up and read this marvelous book.

The House of Impossible Beauties is a gorgeous novel about transgender and gay kids set in the 1980s filled with stories that will make you feel every emotion possible. Once you finish reading this book you’ll want to read it again.

I would like to thank the publisher Oneworld Publications for sending this book my way in exchange for an honest review. All opinions in this review are my own and not influenced in any way.

Add ‘The House of Impossible Beauties ‘ to your TBR: 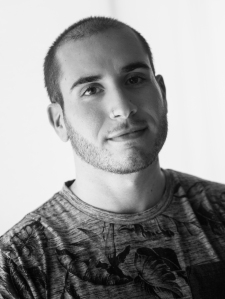 Joseph Cassara was born and raised in New Jersey. He holds degrees from Columbia University and the Iowa Writers’ Workshop and has been a writing fellow at the Fine Arts Centre in Provincetown, Massachusetts. The House of Impossible Beauties is his first novel. He lives in Iowa.

You can find my Q&A with the author below.

First of all I would like to thank you for taking the time out of your schedule to answer a few questions for Breathing Through Pages.

The House of Impossible Beauties is your debut novel – tell me, what inspired you to write it?

When I first started writing it, I didn’t realize it was going to be a novel. I had always loved the documentary Paris is Burning, and I wrote a few scenes that imagined fictional characters interacting with the real people from the film. Then after about 40 pages, I realized that the scope of whatever I was doing was novelistic, and not right for a short story.

I was inspired by the lives of the young gay and trans kids that we lost too soon. I wanted to write an homage to them in a way that captured the beautiful cadence of their speech, code switching, and the sounds of the music genres that were popular at the time, most notably, Latin freestyle and hip-hop.

How long did it take you to write this novel?

Two years to get to a complete draft that I was happy with. Then about four additional months of revisions with my editor.

Before reading this book I watched Paris is Burning (which is amazing) and I wondered what was it that left a huge impression on you and made you think “I want to write a story inspired by this.”?

I don’t think I ever sat down with the intention to write a story inspired by it. Their stories haunted me. I simply had to write the book because it felt so urgent and necessary. I wondered if they would have been my people if I had been born a decade or two earlier. Would I even be alive, if that were the case? I wanted to see a book where queer Latin kids (I was once a queer Latin kid, afterall) were given the full human depth and complete narrative arc that has been previously denied to us in the media.

I am a morning writer. I make a cup of coffee and write until lunch. On the good days. When I’m working on a project, I need to write every day, though I take weekends off. I try to write one thousand words per day. I reward myself with chocolate. I keep a notebook to jot down dialogue ideas, which pop into my head randomly. I write prose on my laptop on a software called Scrivener, which is perfect for novelists. But I prefer to outline and jot down notes in pencil (Palomino blacks, soft graphite), or ink (Lamy 2000 with beautiful blue ink).

Do you have a routine of writing at a certain time for a couple of hours or do you do it spontaneously?

I am very regimented about it because I find that when I sit down at my desk at 9 am, my brain knows it’s time to write. It’s much easier to get into the zone, much like if you go to bed at the same time every night, you will do so with greater ease.

Do you have any strange writing habits?

No, I don’t think I do. Though if I did, I probably wouldn’t divulge that information.

Was there a particular scene which you found hard to write (spoiler-free if possible)?

Yes, tons. I cried twice while writing the book. I found Hector’s letter to Martha Graham very difficult to write. I also found the last two scenes of Part 3 to be very difficult.

Which character in your book do you most relate to?

I think they each have random small elements of myself in them, or at times they say things I would probably say. So in that sense, all of the characters feel like slight refractions of myself or aspects of my personality that might be at odds with each other. They see the world the way I do, I think, because I wrote them.

Are you an introverted or an extraverted person?

Introverted. My favorite way to wind down after an exhausting social interaction is drink tea with honey in bed, with a candle lit.

What authors have influenced you and made you fall in love with reading and eventually writing a novel?

If you could only read one book for the rest of your life which book would it be?

That’s such a depressing thought. I guess I should pick a long one, no? Maybe the Decameron.

I love finding new books so I want to ask you what are your favourite books?

The Heart is a Lonely Hunter by Carson McCullers, We the Animals by Justin Torres, Song of Solomon by Toni Morrison, No One Belongs Here More Than You by Miranda July, Play It As It Lays by Joan Didion.

What are you currently reading?

A biography of the American painter Grant Wood.

Can we expect more books from you in the future?

Yes. I’m working on another novel. But it’s a secret, kind of. (Look at the answer to your previous question for a hint.)

Thank you very much for doing this, Joseph.